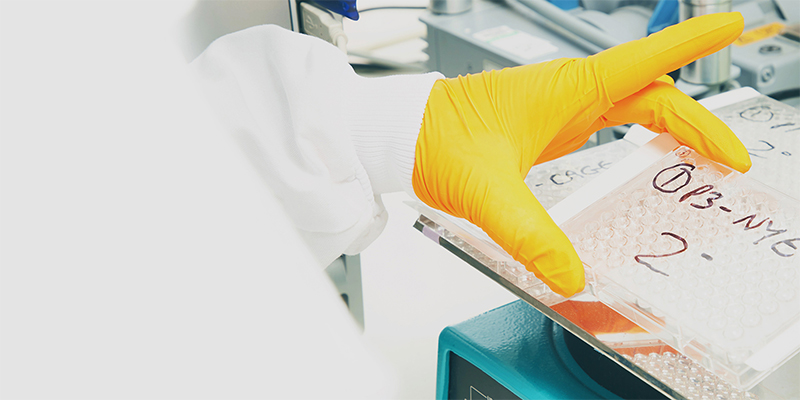 Oncimmune Holdings plc (AIM: ONC.L), a leading early cancer detection company developing and commercialising its proprietary EarlyCDT® liquid biopsy platform technology, today provides an update on the business ahead of its full year results for the year ended 31 May 2018, expected in October 2018.

Geoffrey Hamilton-Fairley, CEO of Oncimmune, commented: "The recent period has seen us continue our strong progress in delivering on our strategy of generating revenues across multiple products, regions and with different partners. Our second test, EarlyCDTÒ-Liver launched in the US in May and we are also making good progress towards obtaining regulatory clearance for the EarlyCDTÒ-Lung test in China. Our Chinese partner, Genostics, completed their £10m equity investment at £1.56 per share in March 2018 and including the contract with them in China, we now have a total of 14 agreements in Europe, Asia Pacific and South America with total minimum sales commitments of £28.8m over their initial periods. Furthermore, in addition to developing further cancer specific EarlyCDTÒ tests, the Company is also expanding its operations in companion diagnostics and personalised medicine. Oncimmune is trading in line with market expectations and I believe we are well placed to continue to execute our business strategy and deliver value in the medium and long term."

Since the publication of our interim results on 13th February 2018, the Company has continued to make good progress against its commercialisation plans.

In the US, we have commenced a marketing programme to support our distributors and the initial data suggests that this approach should lead to enhanced sales. However, there is considerable further learning from the various experimental approaches being tested before we can be reach a level of confidence that will enable us to invest more heavily in this direct marketing approach in the knowledge that it will generate acceptable returns.

Our pilot distribution partnership with a major US pulmonology sales force has been completed and the results were very positive with the test performing as expected. The use of our EarlyCDT®-Lung test led to many cancers being detected earlier and physicians from the pilot have continued ordering the test as part of their daily practice.

At the end of 2017, we launched a simplified blood sample collection procedure - using a "finger stick" - which increases the speed and simplicity with which the EarlyCDT®-Lung test can be ordered and completed, with no loss of performance. As anticipated, the finger stick collection aided adoption in the pilot, with approximately 40% of the samples collected in this way. Distribution terms are now being discussed which, if concluded successfully, will give the Company access to a significant proportion of the pulmonologists in the US. Concurrently, the Company is also continuing to explore further pulmonology distribution channels in the US with other parties.

In May, we published results from a health economic study in PLOS ONE which showed that the EarlyCDT®-Lung test is cost effective in the evaluation of incidentally-detected pulmonary nodules, versus CT surveillance alone, further underpinning the test's positioning in this setting.

In January, we announced we had signed a framework agreement for an exclusive licence with Genostics Company Limited ("Genostics"), a Hong Kong registered company part of the Gene Group Holdings Limited group. The agreement is for the distribution, manufacturing and future development of all products related to Oncimmune's EarlyCDT® platform for the People's Republic of China. Under the terms of the licence, Oncimmune will receive a royalty of 8% to 12.5% on the gross revenue subject to aggregate minimum royalty payments over the first six years post market entry of £15.7 million and £5 million (index linked) per year thereafter. Genostics has also invested a total of £10m in Oncimmune by way of subscription of Ordinary Shares, the final tranche of which was completed in March. Genostics will start to sell EarlyCDT®-Lung within 36 months of the date of the agreement, subject to China FDA approval. Good progress since January has been made in the regulatory submission planning and we expect sales to commence on track.

We now have a total of 14 agreements in Europe, Asia Pacific and South America with total minimum sales commitments of £28.8m over their initial periods.

The EarlyCDT®-Liver test was validated according to schedule and in May 2018 it was made commercially available in the US. The test will initially be supplied as a central laboratory test in the US in the same manner as the EarlyCDT®-Lung test is currently supplied. It is a simple blood test which is complementary to diagnosis via imaging, and can aid in stratification of high risk patients whose diagnosis is indeterminate following ultrasound and CT or MRI. The test can also aid in the risk assessment and early detection of hepatocellular carcinoma ("HCC") in high-risk patients with hepatic lesions less than 1cm. We expect the "kit" version of the EarlyCDT®-Liver test to be available by our year end in 2019. This will enable us to use our current distributor network to generate sales worldwide.

EarlyCDT®-Liver will initially be available through Oncimmune's existing distribution network in the US, and the Company is looking for further specialist distribution partners in the US and other global markets who target hepatologists, with a view to a full national launch during the second half of 2018.

Liver cancer is the second most common cause of death from cancer worldwide and is particularly prevalent in Eastern and South-Eastern Asia with China accounting for approximately 50% of cases globally. It is associated with hepatitis B and C infections, consumption of alcohol, smoking, and, in the West, with fatty liver disease related to poor diet. The prognosis for liver cancer is very poor and there is a clear clinical need for improved diagnostic testing. Globally 700,000 new cases are diagnosed each year and the annual death rate is in excess of 600,000. The EarlyCDT®-Liver test has the potential to offer a highly cost-effective screening tool to complement the performance of the current diagnostic test alpha fetoprotein (AFP), which has come under scrutiny as the levels can be raised in many patients who have liver disease but not HCC.

It is anticipated that territories outside the US, especially China and the Asia Pacific region where hepatocellular cancer incidence is four times that found in the US, the test will be used as a front-line screening test for high-risk patients who have Hepatitis B or C. Work has already commenced with our Chinese partner to validate the tests use as a screening test on a Chinese population.

We appointed Dr Adam Hill MB PhD, to the Company's Board as Chief Medical Officer and Chief Strategy Officer, commencing on 9 April 2018.

Adam is a dual-qualified Clinician and Engineer, with a career built in industry, academia and practising medicine.  During his career, Adam has held Chief Medical Officer and other senior management roles at private and listed companies, supplemented by advisory and government policy appointments.

Adam's appointment, along with the appointment of Annalisa Jenkins earlier in the year, further strengthens the Oncimmune Board as we continue to commercialise our proprietary EarlyCDT® platform technology.

Our R&D programme continues to progress in companion diagnostics. Studies are underway alongside drug development programs at biotech and pharma companies. The first published set of results from our Scancell collaboration were received positively and we plan to continue to pursue both areas over the next year. In addition, further studies with the fingerprinting technology, which allows personalised immune profiling, are currently being undertaken.

We continue to deliver on our strategy to create value from our core autoantibody platform and the board is confident that the Company is well placed to execute its plan. The Company expects to be trading in line with market expectations for revenues for the year ended 31 May 2018 and ahead of expectations for operating costs and cash position. With multiple distribution agreements in place and our technologies being rapidly adopted across the EarlyCDT® platform, the Board is confident in Oncimmune's future prospects.