Avacta Group plc (AIM: AVCT), the developer of Affimer® biotherapeutics and reagents, is pleased to announce that it has signed a collaboration and license agreement with AffyXell Therapeutics (“AffyXell”), the recently established joint venture with Daewoong Pharmaceutical (“Daewoong”), to develop Affimer proteins to be used by AffyXell for the generation of new cell and gene therapies.

Avacta and AffyXell will now work together to develop Affimer proteins against a range of targets which, when produced by mesenchymal stem cells (MSCs), are intended to inhibit inflammatory and autoimmune pathways and improve the overall efficacy of MSCs, creating a next generation of stem cell therapies.

The initial focus for AffyXell will be on inflammatory and autoimmune diseases. In the longer term, there is potential for AffyXell to address oncology uses for these Affimer-enabled cell and gene therapies.

Under the terms of the collaboration and license agreement, Avacta’s research and development costs associated with generation of the Affimer proteins will be funded by AffyXell.  In addition, Avacta will retain the rights to commercialise the Affimer proteins outside of the field of cell therapies.

“The potential for AffyXell’s new class of cell therapies, which can be applied to a wide range of inflammatory and autoimmune diseases, is enormous. We are therefore very excited by the opportunity to be part of this new venture and to demonstrate the power of Affimer proteins in the field of engineered cell therapies.

“Our objective is for these cell therapies to finally fully address diseases, such as inflammatory bowel diseases and multiple sclerosis, as well as other autoimmune diseases, such as chronic obstructive pulmonary disease. The potential to make a difference in the quality of life for millions of patients continues to inspires us, as we know it does our colleagues at Daewoong as well.

“From a commercial perspective, the global stem cell market is expected to be worth USD 16bn* by 2025.  AffyXell has a unique opportunity to combine two world-class technologies, Avacta’s Affimer antibody mimetic platform and Daewoong’s proprietary technology for generating “off-the-shelf” allogeneic MSC therapies to create the next generation of stem cell therapies. We believe that this has the potential to create substantial value for stakeholders in the near future.”

“We are very excited to contract this Collaboration and License Agreement followed by the successful establishment of an innovative joint venture, AffyXell. Daewoong and Avacta will make every effort to AffyXell’s growth and its development of distinguished and innovative cell and gene therapy treatment.

“As announced at the J.P. Morgan Healthcare Conference this January, Daewoong has been inspired to partner global biotechnology companies like Avacta to create the best and the most comprehensive technology in new drug development field. Starting from our very first cell and gene therapy specialized joint company, we reaffirm our belief that our contract can not only further establish AffyXell to thrive as an leader of cell and gene therapy, but also, allow us to enhance quality of lives to those who suffer from rare and intractable conditions.” 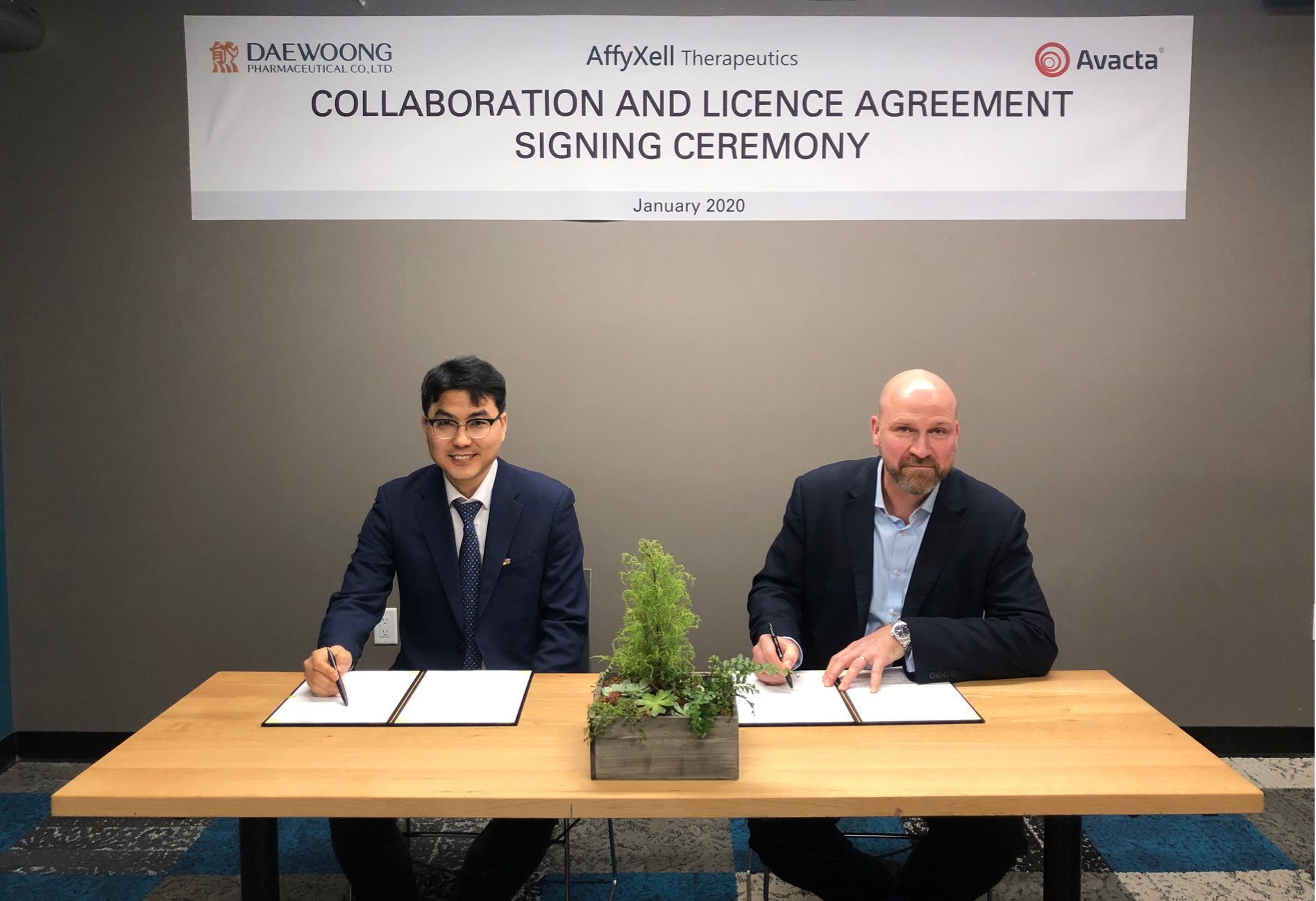